The historic military post in Mineral Wells, Texas, about 50 miles west of Fort Worth on Highway 180, has functioned under a variety of names and performed a variety of services over the almost 90 years of its history.

As the need for helicopter pilots grew to support the Vietnam War effort, the base again changed its name, this time to Fort Wolters. After the war, the base was closed and most of the property transferred to the City of Mineral Wells. Later, its name was changed to Wolters Industrial Park, and many of its properties were sold to a wide variety of buyers who used them for homes, storage units, businesses, city facilities and other uses.

Local businessman’s group bought some of the Camp in April 1947 and formed Camp Wolters Enterprises, Inc.

Formal transfer of Camp Wolters to U.S. Army control occurred at a dedication ceremony on July 13, 1956.

The school was officially re-designated the U. S. Army Primary Helicopter School on December 28, 1956.

Fort Wolters was re-designated the U. S. Army Primary Helicopter Center/School on March 15, 1966.

The U. S. Army Primary Helicopter Center/School was transferred to the U. S. Army Aviation School at Fort Rucker, Alabama, in 1973.

Fort Wolters was deactivated in 1975.

In 1998, the City of Mineral Wells established Fort Wolters Historical Park on the triangle of land located about a half mile north of the entrance to Fort Wolters at the junction of Hood Road, Lee Road and Washington Road.

The park contains signage providing information about the history of Fort Wolters, a historic playground helicopter and toy cannon, and a large memorial to the recipients of the Medal of Honor who served at either Camp Wolters or Fort Wolters.

More information about Fort Wolters is available on the Fort Wolters Historical Marker located at the south end of the park.

From 1941 to 1973, the Fort Wolters Main Gate provided access to various military services located on the base, which, by that time, had spread over thousands of acres.

Activated in 1956, the U. S. Army Primary Helicopter School trained more than 41,000 students from 30 countries, all of whom passed through this gate during the posts’ 17 years of operation. Named The Primary Helicopter Center in 1956, the base was renamed Fort Wolters in 1963 and provided basic and primary flight training for U. S. Army rotary-wing pilots. The base also trained helicopter pilots for the Marine Corps in 1968 and for the Air Force in 1970. By 1970, Fort Wolters spread over 8,500 acres, plus an additional 1,700 acres of leased land, to provide space for more than 1,000 helicopters. 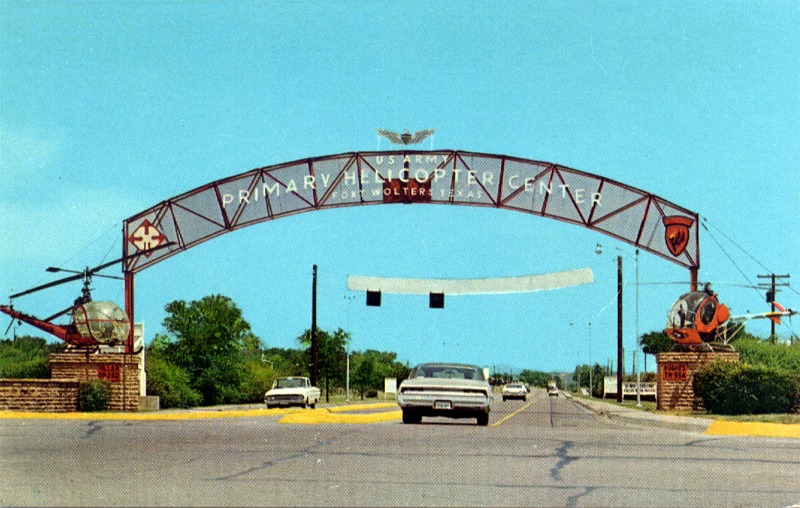 In 1967, Colonel Robert O. Lambert, Commander, U.S. Army Primary Helicopter Center and Fort Wolters, Texas, tasked Troop Command (parent organization of the four WOC companies) to build and erect an arch over the main gate. Lieutenant Colonel John L. Holladay, Commander, Troop Command assigned the job to 2nd WOC Company. Major Roy Steves commanded 2nd WOC at the time. His Executive Officer, James Dixon, who led Warrant Officer Candidate (WOC) Class # 67-5, volunteered to manage the project. Dixon, along with others associated with the base, came together in early 1967 to build the archway, shown above, from assorted materials gathered from the base.

Mr. Dixon provided the details below about its construction. He had worked on commercial construction before joining the Army, had served in two Army Construction Engineer Battalions, and taught engineering subjects in the Special Forces Training Group, Ft. Bragg, North Carolina prior to attending Flight School in WOC Class 64-2W. The Post Engineer’s office was tasked to provide support.

The Post Engineer and Dixon mitigated the limited budget issue by finding surplus materials to use — steel H-beams for supports, numerous lengths of channel iron for the arch’s framework and steel mesh to cover the front.

The Post Engineer was concerned about the long span of the arch. The span was at least twice that of the Fort Rucker arch. But, it was finally agreed to move forward.

With no money to hire a contractor and no expertise available in the Post Engineer’s office, Dixon proposed using WOC volunteers. WOC Class 67-21 was the resident class in 2nd WOC Company at the time. Dixon was confident that, in a class of 320 people, he could find several candidates with experience in steel work and welding, and he did. Two WOCs served as key personnel, one a welder and the other an ironworker.

The Post Engineer provided a welding machine, a transit, engineer chains and tapes, sledgehammer, railroad spikes and other items. Using the transit, engineer tape, and chalk, and rough sketches, Dixon laid out the arch on the asphalt pavement behind 2nd WOC Company. The workers drove railroad spikes about every four feet along the chalk template, then bent, secured, and welded the steel channel irons. Step by tedious step, the arch was fabricated in two sections, to be put together on site. Footings were dug and two steel H-beams were set in each footing and concrete poured around the H-beams. The sole plate holes of the arch were designed to line up with holes in the top plates of the H-beams so the structure could be bolted together. The two sections of arch were loaded on low-bed trucks, hauled to the site and connected together. The arch was set in place with a truck-mounted crane. Workers lined up the holes in the steel plates, bolted the plates together, and declared the project a success.

A few weeks later, the Post Engineer added the letters, patches, and wings to the structure.

In 1968, two helicopters were mounted on pedestals made from the modified guardhouses moved from the original “Old” Camp Wolters gate. The archway was installed later that year. Other modifications such as lighting, walls, signs and landscaping were added over time until Fort Wolters was officially closed in 1974.

After its closing, various parts of the base were given to the City of Mineral Wells and other groups. In 1975, it was renamed Wolters Industrial Park and the archway was changed to reflect the new name. The helicopters and other items near the gate were removed.

In the Summer of 2010, a committee was formed to oversee the restoration of the gate to its general appearance in 1968.

Fort Wolters Main Gate and Arch in the summer of 2010, prior to its removal to begin the restoration process.

On 12 March 2011, the Fort Wolters Gate Committee dedicated the archway, now restored to its original appearance to honor its history and the history of Fort Wolters.

Camp Wolters was established in 1925 on fifty-seven acres just east of what was then the City of Mineral Wells, which purchased the site and presented it to the state of Texas for the camp’s headquarters. The camp was named for Brigadier General Jacob F. Wolters, Commander of the 56th Brigade of the Texas National Guard, and served as the headquarters for all mounted cavalry in the National Guard in the state of Texas. The Guard still uses a portion of the post today for training. By 1927, a thousand officers and men, and the same number of horses, were encamped at the base. The citizens of Mineral Wells leased another 2300 acres surrounding the original site for three weeks annually for maneuvers. Just prior to World War II, the citizens leased more land surrounding the original camp and authorized the construction of buildings on the property.

On October 30, 1940, Mineral Wells was selected as the location of the Infantry Replacement Training Center. The city leased almost all of the Camp Wolters site, now totaling 7500 acres, to the federal government for the center. The camp became the nation’s largest infantry training center replacement center, housing 30,000 at one time. It was home to the internationally famous “F” Troop of World War II, one of the many mounted units trained at the camp. The center was deactivated by the U. S. Army on January 19, 1946.

The camp was purchased after the war by a group of Mineral Wells businessmen, who turned it into Camp Wolters Enterprises, Inc. In February, 1951, the camp was reactivated and redesignated Wolters Air Force Base, with the mission to house the newly-formed Aviation Engineers Force. On July 1, 1956, the camp was transferred to the U. S. Army and on September 26, 1956, the Army Primary Helicopter School was established. On June 1, 1963, the base was redesignated Fort Wolters. In March, 1966, the base was redesignated the U. S. Army Primary Helicopter Center.

The original 57-acre site was located at the current site of Mineral Wells High School.

The original main gate for the camp was located on what is now Highway 180. Later, the National Guard built an armory on the west side of the camp entrance. In 2012, the old armory was sold to Peron Industries, which updated it to modern standards.

The old camp entrance is just a few blocks west of the main entrance to what was Fort Wolters, renamed after the closure of the base to Wolters Industrial Park. The photo below shows the old camp’s main gate as it was in the mid-1930s. 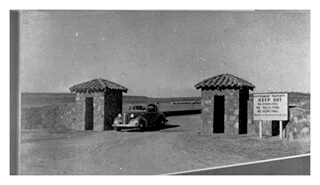 Significant portions of the old camp’s entrance street walls remain. The wall was built by the federal government Works Progress Administration around 1936. A portion of the wall on the east side of the street, nearest the highway, was restored by the Fort Wolters Gate Committee in 2012, and a historical marker was installed nearby by the City of Mineral Wells in 2012.

If sufficient funding can be developed, the gate committee would like to restore the rest of the several hundred foot long eastern wall, which ends near the high school. 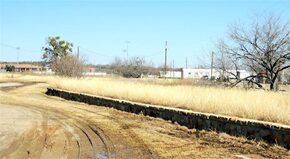 An historical marker, provided by the City of Mineral Wells, was installed on the west side of the old Camp Wolters entrance and dedicated in 2012. It is shown in the photo below.

The park was established in 2012 by the Mineral Wells Independent School District Board of Trustees.

A memorial was added to honor the fourteen recipients of the Medal of Honor who served at Camp Wolters and Fort Wolters. The memorial was built by volunteers. A drawing of the memorial, by noted Mineral Wells artist, Jacqueline Bandy, is shown below, along with a photo of the completed memorial, which was dedicated in 2011. 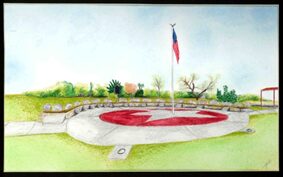 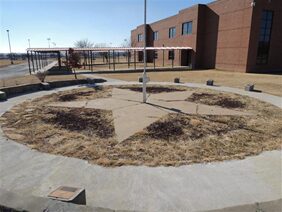 For more information about Camp Wolters visit the website, www.FortWolters.com, or view the Pictorial History of Fort Wolters that is available from the University of North Texas Libraries on their website: www.texashistory.unt.edu